Small Muscles or All Muscles?

In recent years, my circle of musician acquaintances has widened to include musicians with special interests in self-care and movement knowledge. Many of them belong to organizations that focus on elements of anatomy and physiology, and I am lucky to learn from them.

Sometimes I hear a group use a phrase I have to rethink, however, and this is the case with the expression that "musicians are athletes of small muscles." Hmm, really? I know the intention is good, but I doubt the substance.

First of all, let's examine the difference between a being musician and being an athlete. While both of these achievements require physical training, only one of them has the primary goal of communicating to an audience. With few exceptions, like figure skating, most athletes are honored for competing in arenas where the goal is technical and physical, not artistic.While a refined athlete may exhibit artistry in motion, it isn't the goal. The goal is, well, the goal: faster, longer, stronger than the other competitors. Musicians are required to be both technically competent and artistically successful.

Secondly, where are these small muscles that musicians use to display their prowess? Perhaps this is a reference to muscles of the hand, so let's start there. There are about 640 generally recognized muscles in the body, and about 35 of them control the movement of the hand. However, only 17 of them are actually contained within the area we consider to be the hand. The other 18 originate in the forearm, and they are much larger than the other 17.  Some of them actually have the descriptor "longus" in their designations. Without these longer muscles, we would have limited movement in the hand. Without control of these larger muscles, we would not be able to perform on our instruments. 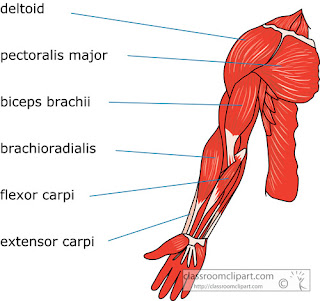 Simply moving an arm from one place to another, something most musicians do at least to bring the instrument into playing organization, requires large muscles in the back that are connected to the arm.  Such movements also require large muscles of the torso and upper arm to go into action. 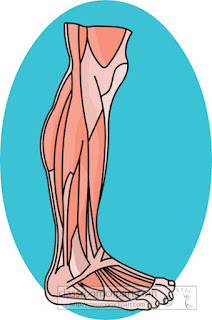 Drummers who play trap set have very active leg muscles. It's exciting to watch the movements of arms and sticks flying through the air, but take the opportunity to watch what they do with their legs. While small muscles of the feet are engaged in playing the pedals for drums, so are large muscles in the legs. They aren't trained for running, but they aren't untrained either.

Speaking of pedals, watch an organist for even five minutes to see legs in action. Organists learn refined balance so they can move both feet and arms in different directions at different times. I continue to find this an extraordinary example of whole body movement and co-ordination. If they only used so-called small muscles, the limitations would be extreme.

How about facial muscles? Are they small? Some of them are by certain standards, but facial muscles are interwoven in sophisticated ways, making them hard to separate from each other even in dissection. For this reason, wind players do well to refrain from getting overly interested in the small number of muscles they consider to make up their embouchures. Wind players also call on large muscles for breathing, including the involuntary diaphragm and large muscles throughout the torso.

Recognizing the whole body - all 640 muscles - as your vehicle for music-making grants more ease and flexibility in performance. And it's also the truth.