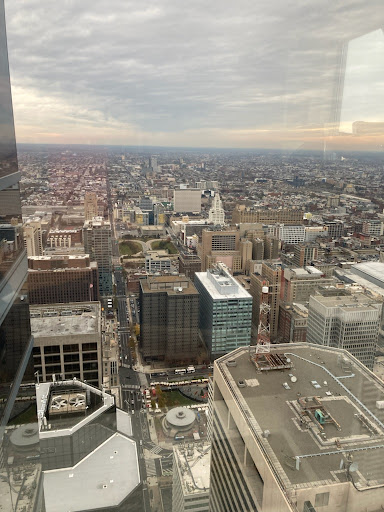 After a two year self-imposed hiatus from city adventures, I went to Philadelphia to hear the orchestra and have a happy family visit. When I'm in any city, I pay attention to the buildings right in front of me, the streets signs, and the traffic, particularly the taxis. I window shop and people watch, with little regard to the city as a whole. This is a nice way of saying I have a rather poor sense of direction, and I root myself to the spot I'm in.

On this trip we had lodgings far above the city with glass walls in the living room. The view of the city was spectacular, with rows of buildings stretching out to the horizon. It was a panoramic view. I loved it.

These two views represent one of the main ways I categorize students: tree learners and forest learners. The tree learners are the ones who fuss over every single detail in the piece. They don't miss articulations, dynamics, or chromatic signs. If they do, they become flustered and apologize profusely. It's great to notice the regard they have for the composer's markings. On the other hand, sometimes the larger picture gets missed, and the music is accurate but not placed into a larger dramatic arc.

The forest learners go straight to the heart. They "get" the meaning of the piece right away, and they dive right into it. The arc is foremost in their attention. It's just not always accurate in terms of what is on the page. 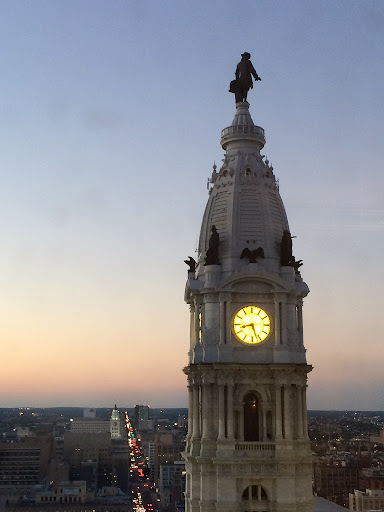 Truth be told, I've been both of these learners. There have been times when I decided that pleasing the teacher meant playing every jot and tittle on the page. Because isn't pleasing the teacher the goal? Most of the time, I'm the lover of the panorama. Friends say I'm a big picture kind of gal, and most of the time, that is true. Maybe that comes from being a decent sight-reader and letting mistakes fly by without concern.

I've also been both of these teachers, some days pointing out every tiny detail in a student's performance. Other days, it's all about the expressive quality of the playing. On my best days, it is some of both.

A student who gets rattled over a tiny mistake doesn't benefit from more needling over details. It just makes things worse. A student who is, shall we say, sloppy, needs more clean-up work in a lesson. It's always a balancing act.

The expression for seeing the details and the arc is inclusive awareness. While looking at the vast skyline of Philadelphia, I was able to pick out buildings I knew by their size and shape without losing the vastness of the city. Probably easier than picking out a specific tree in a forest of trees, but it's the principle that counts. It's the same principle we can apply in performance and in teaching.

In my studio, she is known as "good old Edna Mae." It's a rare day that her contributions are not part of my teaching agenda. I've looked for other options, but her technique series called "A Dozen A Day" (ADAD) has yet to be surpassed.

The first time I came in contact with ADAD was as a student member of my college's Sigma Alpha Iota chapter. We were participating in a larger effort to aid visually impaired students in obtaining access to her system. We did it by hand - yes, I'm dating myself - with pencil erasers that were crimped to form the oval shape of note heads. We traced them on large staff paper and filled in the note heads as required. It was tedious work, and it got sent on to the Library of Congress for copying. Any teacher requesting these materials for a student could get them.

By now, this is an antiquated method by anyone's measure. We have machines to enlarge printed works and reproduce them proportionately. We have access to scores through digital devices. However, thanks to Edna Mae's creativity, the contents of ADAD remain timeless.

When Edna Mae Burnam wrote Book One in 1950, she had reached the 43rd year of her 100 years on Earth. She was teaching young students who needed technique at relatively easy levels that would appeal to them, their parents, and their teachers. She gave the short patterns names related to exercises, like jumping, hopping, swinging, rolling, and kicking. Her publisher, Willis Music, didn't understand these names, so she drew stick figures to illustrate the connections. She didn't expect them to show up in the book, but Willis really liked them. To this day, every exercise has a non-gender specific character accompanying each element.

As an Alexander Technique teacher and a Licensed Body Mapping Educator, I have come to appreciate these characters on a larger scale. Not only do they tag the patterns with joyful illustrations, they also show the whole body. The whole body! Every illustration is a reminder that we play with the whole body, not just our fingers and hands.

Fortunately for Edna Mae, her Book One was a success. It had one problem: teachers wanted easier levels that could be started almost from the first lessons. Thus was the Preparatory Book born, and then the Mini Book. From there she built three more advancing levels to match her lesson series, Step by Step. Over time, Step by Step proved less popular, but ADAD is still going strong.

How did she make it so good? First, she built the technical exercises in well-designed steps. They build the basic movements required in advancing piano literature, no matter the method. Second, she made them short. It's almost as though she knew that 70 years later our attention spans would shrink. Third, she made them easy to transpose. First year students can transpose these exercises to multiple patterns with ease. And, fourth, they have a spirit of fun to them. Some of my students add faces and hair to the stick figures, and some of them color them. Again, the non-gender specific drawings were ahead of their time, and they can be adapted by any willing student artist.

Good old Edna Mae confirms my belief that making something easy and effective is an act of brilliance. Few notes but lots of practical movements. Imaginative titles and characters. Efficient use of practice time. Hail to you, Edna Mae Burnam! 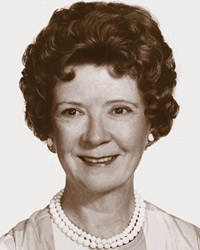 To see a video interview of her, go to this URL: https://www.namm.org/library/oral-history/edna-mae-burnam

A powerful moment on stage is when an actor is standing, not necessarily speaking, and not gesturing nor traveling in space. I was reminded of this while watching a young actor whose blocking had him stand still while the rest of the ensemble moved around him. He was connected to the stage, beautifully upright, looking ahead with intention but without the slightest bit of tension. While others may say he has beautiful posture, I say he has balance, awareness, and clarity in the moment.

When actors of olden days applied posturing to a character, it was a way of expressing movement that fit the character's character, so to speak. That still happens today, and you can see it in well-trained actors. They don't call it posturing nowadays. They learn movement options, often in an Alexander Technique class. One of those options is being fully embodied, even if standing on one's mark.

Because I am an Alexander Technique Teacher, clients often come to me seeking a way to improve their posture. When I ask them what that means to them, they usually demonstrate something very stiff. One of my students demonstrated posture by backing up into the wall and then stepping forward, using effort to maintain a sense of perfect uprightness.

Being up in space is a natural way of being. Most of the muscles and connective tissues that have this primary job are very close to the spine. Unfortunately, when people think of posture, they disregard this natural structure and apply considerable effort to superficial muscles. Superficial muscles are designed to move bones through various ranges of motion, dependent upon joint structures and the variety of forces applied in movement. When they are used consciously for uprightness, movement becomes limited and sometimes painful.

A musician who has a goal of perfect posture may do the same thing - restrict movement for the sake of an ideal position. However, a musician who understands that being upright is an internal mechanism that doesn't need that level of work will find both freedom and balance. That musician will trust being up in space to allow for the expressive and technical requirements of the instrument and the music. 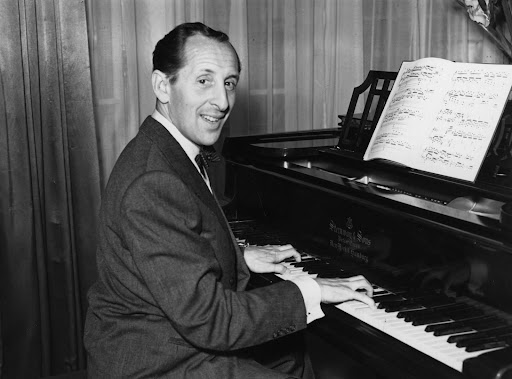 Here is a photo of outstanding pianist, Vladimir Horowitz. He had a long career of playing from a place of beautiful balance. Notice how easily he moves his head while posing for this picture. If he had a concept of posture that was stiff and inflexible, he wouldn't be able to do this. I was fortunate to see him play live, and his balance and control of sound were magnificent. 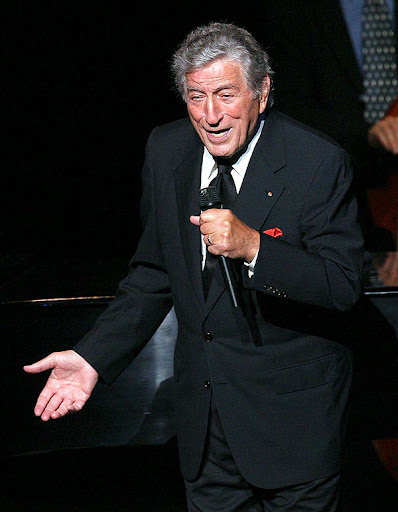 Here is a photo of singer Tony Bennett, known for his smooth, expressive delivery of the American Song Book, including duets with Lady Gaga. He just retired from public performance at the age of 95. His standing balance contributes to the ease in his singing style.