The most recent TV incarnation of Sherlock Holmes appears in the series "Elementary". The show is one of my favorites thanks to the acting, writing, and the opening credits. The backdrop for the credits is a demonstration of kinetic energy represented by a marble winding its way through a complex of tubes and wheels, much like a Rube Goldberg machine or the game "Mouse Trap", and finally coming to rest. While I'm sure it is meant to represent the mental processes of the great detective and his sidekick Watson, it reminds me of the workings of piano action. 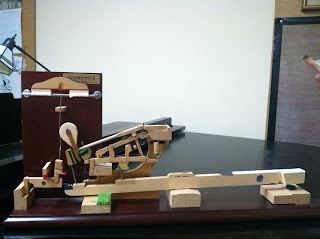 There are about 100 moving parts between every key on the piano and the strings that go with it. This is one of the reasons an acoustic piano costs more than a large dining table. Each of these parts has a distinct shape, placement, and purpose. The pictures of this action model provide a glimpse into the world of the expert piano technicians who maintain our pianos. 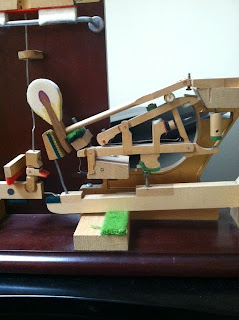 Pianists don't have much control over this collection of wood, wires, and felts. The only part we contact in most music is the key itself. By sending the key down, we cause all the parts of the action to perform in sequence, with the end result being the hammer's striking of the string.  Because the key has a set weight and the hammer has a set weight, there is no way to increase or decrease the weight of these elements of the action during performance.

Which brings us to this all-important formula from the world of physics: F=ma. F represents force, m represents mass, and a represents acceleration. Fear not! This is the only formula you need to know in order to understand why weight is not the changing factor in sound production at the piano, but do take a look at the definitions of these factors:

Force is
* any influence that changes the state of motion of an object.

Acceleration is
*the rate at which the velocity of an object changes over distance and time.

Mass is
* the quantity of matter regardless of its volume or any forces acting on it.
* the property of matter that causes it to have inertia – resistance to change in motion.
* a constant.

And, for the sake of clarity,

Enough physics for today, but keep this information handy for Part Four.