"Snow is falling, snow on snow." One of my favorite carols is In the Bleak Midwinter, with lyrics by Christina Rossetti. The words are simple but beautifully arranged, like "snow on snow." I wasn't thinking of these words while sitting halfway up a hillside, unable to get traction to the top, but the word "bleak" may have been appropriate.

My fellow travelers and I were aiming at the top, but not in straight lines. Depending on which way the skids had taken us, we formed a kaleidoscope of angles and colors against the gray surface of the icy roadway. We sat in our metal cocoons, not quite sure what sign would appear to let us know that we could forge ahead. We all waited. 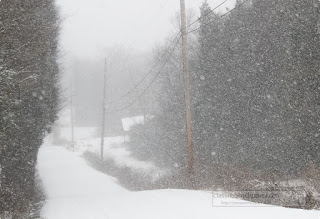 At some point, maybe after 30 minutes or so, one person stepped out to see what was going on ahead. Not only was the surface slick, but visibility was poor. That one person unintentionally gave others permission to do the same. I stepped out to ask for help from the truck driver next to me, who kindly pushed me to the left lane so I was less of an obstacle to those behind me. I then walked back to the car behind me to explain that I couldn't get a running start. Neither could he. We began to connect in our plight, some of us shrugging, some complaining, some making light jokes "in keeping with the situation." (Thanks, Dickens!) In and out of vehicles, in and out of snow, in and out of communication. 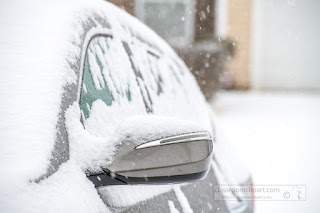 After about an hour, a state trooper and a snow plow arrived. The trooper became an impromptu conductor, planning our exit order, and pushing us out with the help of some stronger stranded drivers. I remember one of them smiling with the knowledge that his helping was valuable. His face seemed to say, "I can do this."

All of this excitement happened a week after the fall studio recital. My opening recommendation to my students was to exhale while waiting to play. Let's face it, one of the biggest differences between practicing and performing in a studio recital is the waiting. I've been considering that it is an element that needs to be addressed more directly.

When I assemble the order of performers, I do my best to take into consider the ability to wait. There are some students that I will ask where they would like to be on the performance schedule. There are others with diagnoses like ADHD that I will place earlier in the program.  I also consider the personality differences, hoping to place a calmer student next to a more excitable one. Occasionally there is conflict that requires a student to play earlier or later in the program to accommodate another commitment. Yes, even for recitals we are faced with this dilemma.

But what about the rest of the students, the ones who could potentially perform in any order? What is waiting like for them? I imagine they are not unlike my fellow stranded travelers, some taking it in stride, some worrying and mentally planning what will happen when their turns arrive. When I asked one of my students which piece she liked best on the program, her response was, "I was so close the end of the program that I really didn't listen to the other performers very well."

While as we teachers we may address self-talk in advance of performance, we may or may not address the mental game of waiting. One the few crash-and-burn performances I have experienced with my students proved to me that this can be disastrous. A well-prepared student had spent the whole car ride in crippling self-doubt, which did not go away at the venue but increased, ruining what would otherwise have been a fine performance. These are things we don't forget as teachers, and definitely things our students don't forget. Trauma is not too harsh a word.

As I look back on this year's recital, I am grateful that no one went deep into the land of negative self-talk, but I still remember that the potential is there. At the moment the hands touch the keys, there is no rescue team available, no one to push the student to safety. The success is riding on preparation and learning to wait with an attitude of  "I can do this."